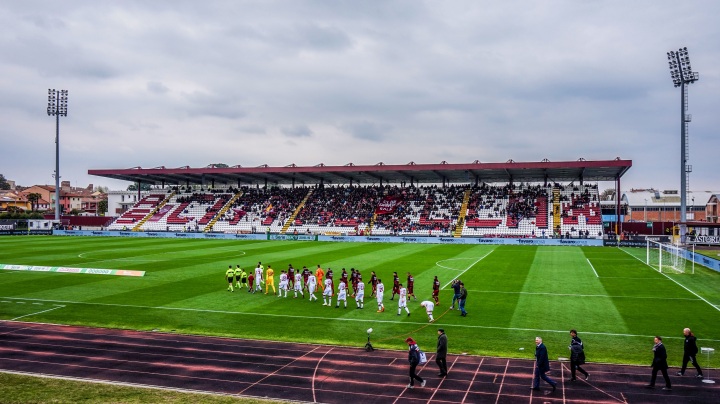 For those outside the medieval walls that house the Comune di Cittadella, Claudio Foscarini’s name may mean little. A Treviso-born, Venetian native with sunken dark eyes, Foscarini spent ten fruitful years as Head Coach of Associazione Sportiva Cittadella S.r.l. before parting ways at the conclusion of the 2014/15 season.

Upon departing, Foscarini could proudly look back at several seasons spent overachieving amongst sides with deeper pockets, greater fanbases, and wealthier histories. Yet, there remained a tinge of regret with the circumstance preceding departure. Across 42 fixtures, Foscarini’s Cittadella side won only nine matches and drew 17 times, therefore losing 38% of their Serie B matches. The difference that a solitary home goal against the likes of Crotone, Ternana or Livorno (all draws) could have made was ultimately the difference between survival and relegation.

In the absence of Foscarini, both fans and commentariat grew dismissive of Citta’s future prospects. Where Foscarini had brought longevity, stability and a specific know-how recognisable to Cittadella, his departure would surely herald an age of uncertainty as a new coach would set about negotiating the tricky terrain of imposing his own ideas on the club while remaining respectful to the mechanisms of recent successes.

In came the 52 year old Roberto Venturato. Although born in Australia, Venturato had spent most of his life around Veneto and was very aware of the geographic limitations of a club like Citta. That Stadio Pier Cesare Tombolato could house fewer than 8,000 fans was understood. That the Comune di Cittadella had a general populace of just over 20,000 was understood. That A.S. Cittadella must return to Serie B was understood.

On the 5th of December 2015, Venturato’s Cittadella travelled east to the Ottavio Bottecchia stadium in Pordenone. Although their opponents that day would offer the greatest competition to Cittadella’s promotion bid, Venturato’s men convincingly won thanks to goals from Gianluca Litteri, Giulio Bizzotto, and Lucas Chiaretti. Those that had previously been dismissive of Citta’s chances of a relative rebirth following the departure of Foscarini took note, and as the Ventian side cruised to the Lega Pro championship, few could argue that Venturato’s side were not worthy winners.

Of the 2015/16 Lega Pro victors, one player in particular continues to play for Cittadella to this day. Having already played for the club between 2006 and 2009, Manuel Iori returned to Cittadella in 2015 and provided much needed experience from the centre of midfield. With 470 competitive matches and counting under his belt, the immaculately groomed Iori – now 37- continues to upset the odds with Cittadella from the base of midfield. In a 4-3-2-1 not too dissimilar to that which Marco Giampaolo found great success with at Empoli, and Maurizio Sarri continues to tinker with when playing Aaron Ramsey and Paolo Dybala, Iori is tasked with disrupting the spaces where opportunity lurks; breaking up moves by simply knowing where to stand before feeding his more creative teammates.

Whereas Foscarini’s last season saw Cittadella amass draws in Serie B, Venturato’s first in Serie B with Cittadella became a study in the extreme. Across the 42 matches played, Cittadella won 19, drew 6, and lost 17 to place 6th and guarantee themselves a shot at promotion through the play-offs thanks in part to the goals of former Internazionale youth Gianluca Litteri.

Although a preliminary round defeat to Carpi halted aspirations of top flight grandeur, the early reign of Venturato had breathed fresh life into the previously mouldering body of Padua’s provincial club and, as such, simmering expectations were at an all new high ahead of the 2017/18 campaign.

Having featured somewhat casually from the bench in the previous campaign, current Genoa star Christian Kouame became the breakout performer of a season where Venturato’s charges again finished 6th in the 4-3-1-2 that had guided them to the playoffs in the year before. After turning several of the 17 defeats of 2016/17 into draws for 2017/18, Citta progressed to the playoff semi finals, only to miss out on promotion to eventual playoff winners Frosinone. Pocketing just shy of £5 million with the sale of 11-goal Kouame, questions were raised of Cittadella’s ability to overcome a second successive playoff defeat to mount another challenge at the right end of the table.

Once more the doubting murmurs muted over a 36 game season as Citta finished in the playoff positions (7th). Where once stood Kouame and Marco Varnier, a new cohort of future stars began to ply their trade at Stadio Pier Cesare Tombolato to reaffirm Cittadella’s credentials as a hotbed for blooding young talent. As January came around, Venturato used his reputation for developing young players to bring SPAL forward and former Italy U21 star Gabriele Moncini to Veneto. 12 goals in 17 matches later, a Citta side in the ascendency thanks to Moncini, hidden talent Giuseppe Panico, and the rapidly maturing Domenico Frare overcame Spezia and Benevento to set up a mouth watering playoff final double header with Hellas Verona.

Last time Cittadella and Hellas had met in the league, Citta had romped to an impressive 3-0 victory thanks to goals from Iori, Moncini, and the often overlooked Davide Diaw but Venturato remained unmoved. Quick to suggest that previous meetings had little impact on the final, Venturato focused solely on a Hellas side that had beaten Perugia and Pescara in a bid to reach Serie A.

In the first leg at Pier Cesare, a well-drilled Cittadella side played out their master’s plan to perfection as they opted to control spaces rather than possession following a 6th minute Diaw goal. As Diaw doubled his tally and that of his team’s in the 80th minute, Cittadella had created 14 chances (matched by Hellas) from a mere 37% possession. For the first time since the club’s founding in 1973, Cittadella were in touching distance of top flight football but it was not to be.

Upon arrival at Verona’s Bentegodi, an unease permeated through Cittadella as an inability to handle the great expanse of 90 minutes football began to tug at their ambitions. Where once an airiness accompanied the disciplined framework of Venturato’s side, a painful traction between fight and flight developed in Citta’s central areas.

Mistakes between transitions proved costly as Mattia Zaccagni broke the offside trap to give I Gialloblu an early shot of adrenaline. Moments after Luca Parodi was dismissed for Cittadella, Samuel Di Carmine offered a picturesque flick at the near post to level the scores on aggregate. The Benetgodi rocked as Verona pushed on.

On 77 minutes, Federico Proia joined Parodi in the changing rooms to leave Citta with 9 men and a loss of hope. As Karim Laribi rounded Alberto Paleari on 83 minutes, the Venitian dream was over as Venturato’s side succumbed to Alfredo Aglietti’s Verona. For the third season running, it was to be a tale of playoff heartbreak.

And so to the current campaign. A summer spent nursing the wounds of the most devastating playoff defeat yet saw several low budget transfers and loans arrive in Cittadella as the likes of Simone Pasa, Nicholas Siega, and Luca Parodi departed the club. Like many of the previous campaigns, predictions of success after adversity remain slight as Venturato looks for a reaction from the regulars and a spark of something novel from the new boys. Roma loanee Žan Celar arrives as a forward not afraid of confrontation and should offer an additional dimension to the frolicking of Panico and the more direct Diaw.

Two early and heavy defeats to Spezia (0-3) and Benevento (4-1) raised concerns that this may prove one season too far for Venturato’s overachievers but wins against Trapani (2-0), Pescara (2-1), and Juve Stabia (0-1) have gone someway to resetting the balance with Diaw scoring in each of the wins. It remains to be seen if Citta can match the likes of recently relegated Empoli in a push for automatic promotion but few at this point would bet against another season ending in the playoff positions.

As more fancied sides catch the lens’ glare, Cittadella are happy to remain the unfancied darkhorse of Serie B in the hope that this campaign sees them continue the trend of their previous three seasons in which they have gone one step further than that of the preceding campaign. Should that continue, Venturato will find himself face to face with the likes of Antonio Conte, Carlo Ancelotti, and Maurizio Sarri at the pinnacle of Italian football, catapulting Cittadella to heights that they can only dream of at the moment.