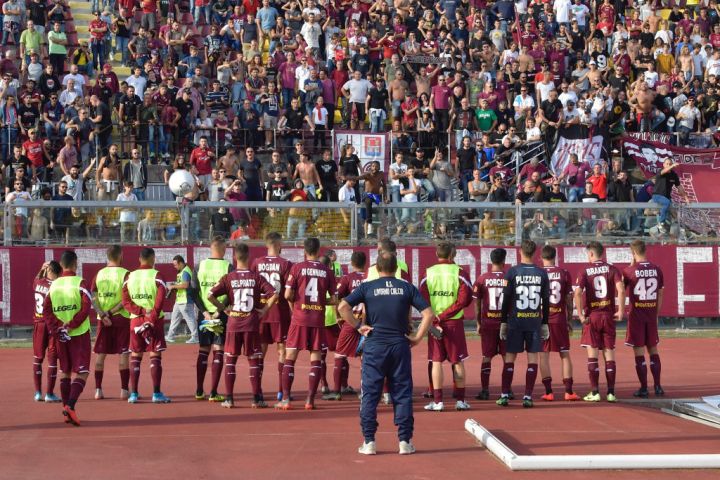 26th June 2020 – a date that will not be remembered in the history of Italian football, but this date is significant for Livorno fans ; it  marks the last time Livorno were victorious in the recent Serie B campaign. The match ended 3-2 to the Amaranto, & it was enjoyable to watch attacking football from a team that fighting  for its survival.  However it was not enough to avoid relegation as it was only the 5th win of the season. Bottom of the league with a measly 21 points ; the win against Juve Stabia seems like a long-time ago now.

So, what went wrong & who is to blame for this mess of a season ?

To fully analyse the current situation, you need to look at Livorno’s past & one central character in the recent history of Livorno is current club president ; Aldo Spinelli. For 21 years Spinelli (with his trademark yellow raincoat) has owned the club & it is fair to suggest that his presidency has seen highs & lows. It was under Spinelli that Livorno were promoted to Serie A in 2004 after 55 years away from the league. Livorno also made their debut in the UEFA cup back in 2006 (although the Calciopoli scandal helped Livorno gain a place in the UEFA cup first round). The excursion in the UEFA cup is now a distant memory as since 2006 Livorno have been relegated & promoted in equal measure since.

One characteristic of the Spinelli presidency is the tendency to loan players from other clubs. This was evident during last season, when around 7 players who were on loan to Livorno were returned to their parent clubs after their loan contacts expired in July. This had a devastating impact on the squad as coach Antonio Filippini had to rely on inexperienced squad members in order to fill the gap left by the departing loanees. This factor accelerated Livorno’s departure from Serie B. Spinelli has announced that he is selling the club, this is a relief to the majority of fans, as many accuse Spinelli of not investing in the club. There was a brief glimmer of hope when Spinelli entered negotiations with Dutch based businessman ; Majid Yousif. Negotiations took place in February & it did appear that this sale was going to take place. Fans (including myself) were looking forward to the sale. Unfortunately  the sale was postponed as Yousif was arrested in Holland on the suspicion of money laundering. The club is still for sale & there are other interested parties, with one consortium from the Veneto region being the frontrunner. We could be witnessing the last days of the Spinelli era.

Things could & should have been different. The 2017-2018  season saw Livorno promoted from Serie C after topping Group A. The season is also remembered for the 2-0 home victory against local rivals Pisa. There was so much optimism for the upcoming season & this optimism increased when the club announced the return of an icon ; Cristiano Lucarelli. As many calcio followers know, Lucarelli is famous for his left-wing political beliefs & taking a pay cut in order to play for Livorno, his hometown club back in 2003. Lucarelli was appointed coach which was a master stroke in terms of public relations for the club. He was unveiled in front of fans inside the Stadio Armando Picchi. The club also managed to sign Alessandro Diamanti (who previusly played for Livorno from 2007-2009), as with Lucarelli’s appointment, the news of Diamanti joining was seen as another positive move among the Livorno tifosi.

This optimism was short lived as Lucarelli struggled & was eventually sacked in November 2018 & was replaced by Roberto Breda. By the time Breda took over Livorno were 19th, bottom of the league. To his credit Breda improved the fortunes of the squad & the team ended the season in 13th place with 39 points, one point above the relegation playout zone. It was a miracle that Livorno survived the battle to avoid relegation.

Alarm bells should have rang for Spinelli, however the old tactic of relying on loan players continued into the next season (as I have discussed previously). Before the season commenced, news broke that Diamanti would be leaving. This was a disaster, as Diamanti played an integral part in Livorno’s relegation survival; his 10 goals were a significant contribution. Without Diamanti & his goals, Livorno were going to find it difficult to avoid relegation. Breda himself was relieved of his duties in December & was replaced by Paolo Tramezzani. Tramezzani faied to improve the fortunes as the club were still bottom of the league when his was sacked & replaced by Breda in February. This main strange to reappoint a sacked coach, but Breda was still had a contract with the club. Breda’s second spell sis not last long as the continued losses resulting Filippini replacing him in March. At this point it was clear that Livorno were going to be relegated.

And so it came to pass, Livorno will start the new season back in Serie C. With the clubs future uncertain & countless news regarding different parties looking to buy the club. It will be difficult to to bounce back into Serie B. The chaos has also effected the backroom staff with veteran goalkeeper coach Pietro Spinosa leaving in July (before the  conclusion of the season), Spinosa has recently joined Ternana who are now managed by a familiar face ; Lucarelli.

Having followed Livorno since 2006 (I’ve been going to games for 6 years now) after seeing them on TV in the UK when they faced Rangers in the UEFA cup, it is sad to see the fortunes of the club fall this dramatically. Spinelli missed an opportunity to build on the European adventure to ensure that the cub could establish a long lasted presence in Serie A. But as it currently stands, the club are facing a battle in Serie C. However, one thing is certain, no matter what league the club are in, I’ll be cheering them on from the Curva Nord.